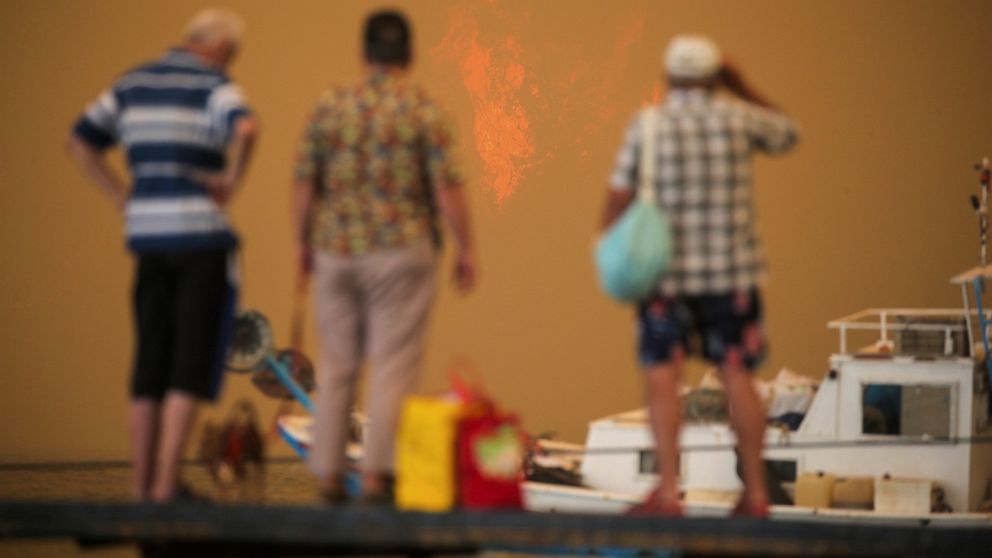 MAZIKOY, Turkey — Wildfires raged near Turkey’s holiday beach destinations of Antalya and Mugla and in the surrounding countryside for a fifth day Sunday as the discovery of more bodies raised the death toll to eight while villagers lost their homes and animals. Residents and tourists fled the danger in small boats while the coast guard and two navy ships waited out at sea in case a bigger evacuation was needed.

Farmer Nurten Almaz said she lost everything. “I feel so much pain, like I lost a child,” she said. The 63-year-old woman lost her animals and her home as well as “one century of people’s labor.” She called for the death penalty for people who may have caused the fire.

Residents had to flee nearby Cokertme village as flames neared. Some got on boats and others left by cars as the fire got closer and closer. In one video, firetrucks and cars were rushing to escape fire raging on all sides. After nightfall, the village looked apocalyptic from a distance, with flames taking over the dark hills.

The area was engulfed by Sunday night, Turkish broadcasters said. Reporters said they had to get hurry to safety as the fire intensified with strong winds. They said many houses burned and warned of a threat to two thermic power plants in the vicinity.

Authorities warned tourists and residents to keep evacuating Turunc, a town in the seaside resort of Marmaris in Mugla province. Fires enveloped the area and strong winds made firefighting efforts more difficult. A helicopter attempted to extinguish the blazes, which were unreachable by land.

Watching from out in the Mediterranean Sea, the area looked a bright orange.

As residents of villages around Marmaris pleaded for more help on social media, people boarded small boats carrying suitcases. Others waited anxiously to see if the fire would come down to the shore.

Social media videos showed tourists in Bodrum scampering down streets rolling their luggage to escape the nearby flames.

Bodrum mayor Ahmet Aras said Sunday evening that people experienced “hell” near Cokertme and Mazi as they drove away from the fire. He said the blaze could not be stopped and hoped to protect residential areas but said it was too late for the trees.

Mehmet Cavdar, 45, looked onto a smoke surrounded neighborhood of Mazikoy from a distance, describing how the fire had sped through the area.

The health minister, Fahrettin Koca, said at least 27 people affected by the fires were still receiving treatment in hospitals while hundreds of others had been released.

The minister of forestry and agriculture, Bekir Pakdemirli, said 117 wildfires were “under control” across Turkey while eight continued. His tweets showed that since Wednesday, wildfires had ignited in 33 provinces.

Responding to criticism of inadequate air support, the minister said Turkey had dispatched four planes, 17 helicopters, 93 firetrucks and nearly 1,500 people to fight the fires in Mugla, where he announced six villages were evacuated.

He added that 12 other airplanes, dozens of helicopters and drones were working across Turkey’s wildfires.

While Turkish authorities say they are investigating whether the fires may have started as “sabotage” by outlawed Kurdish militants, experts mostly point to climate change along with accidents caused by people. Erdogan said one of the fires was started by children.

A heat wave across southern Europe, fed by hot air from North Africa, has led to wildfires across the Mediterranean, including on the Italian island of Sicily and in western Greece, where some residents had to be evacuated by boat to escape the flames.

On Sunday afternoon, bathers on an Italian beach south of the Adriatic city of Pescara fled when they spotted towering clouds of smoke and flames from a fire in a nearby pine forest, the Italian news agency LaPresse reported. Several people were reportedly injured when they tried to put out wind-whipped flames that had reached their homes. Local officials told state TV that an elderly home in Pescara had to be evacuated.

Meanwhile, in Turkey’s eastern Van province, floods over the weekend destroyed at least six houses after a small river overflowed amid heavy rains. Villagers were ordered to leave their homes and climb to higher locations.

Bilginsoy reported from Istanbul. Robert Badendieck in Istanbul and Frances D’Emilio in Rome contributed to this report.

Follow all AP stories about climate change issues at https://apnews.com/hub/Climate.