By HYUNG-JIN KIM Associated PressOctober 2, 2021, 4:06 AM• 5 min readShare to FacebookShare to TwitterEmail this article 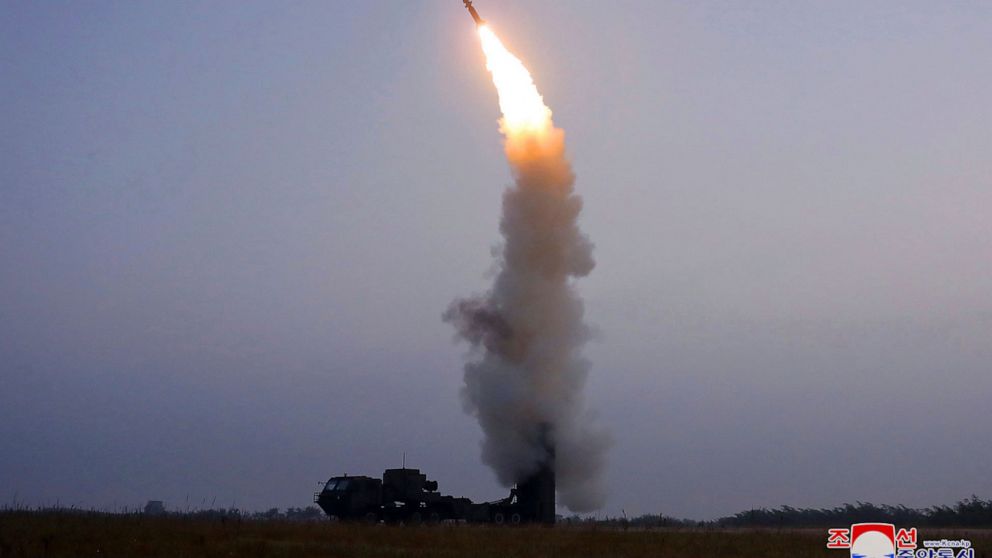 SEOUL, South Korea — North Korea said Friday it test-fired a new anti-aircraft missile, its fourth weapons launch in recent weeks, which experts say is part of a strategy to receive relief from economic sanctions and win other concessions.

South Korea, Japan and the United States typically publicly confirm North Korean ballistic missile launches, which are banned by U.N. resolutions, soon after they occur. But they did not do so for Thursday’s launch, indicating the weapon tested may have been a different kind. Seoul’s Joint Chiefs of Staff said Friday that South Korean and U.S. intelligence authorities monitored moves by North Korea but didn’t elaborate.

Three weeks ago, North Korea resumed missile tests after a six-month lull. As it has sometimes done before, North Korea combined the show of force with a more conciliatory gesture, offering earlier this week to reactivate hotlines that North and South Korea use to set up meetings, arrange border crossings and avoid accidental clashes.

Diplomacy aimed at getting North Korea to abandon its nuclear arsenal in return for economic and political rewards has largely been deadlocked since early 2019. That has left North Korea under crippling U.S.-led economic sanctions at a time when its fragile economy is suffering massive setbacks due to the coronavirus pandemic. North Korea’s latest moves appear aimed at pressuring South Korea, which wants to improve strained ties on the peninsula, to persuade the U.S. to relax the sanctions.

Kim Dong-yub, a professor at the University of North Korean Studies in Seoul, said the launch appears to be the primitive stage of a test to develop a missile designed to shoot down incoming enemy missiles and aircraft. He said the missile resembles the Russian-made S-400 air defense system, which he said has a maximum range of 400 kilometers (250 miles) and is reportedly capable of intercepting stealth jets.

The U.N. Security Council received a briefing on the recent launches and the humanitarian and COVID-19 situations in North Korea at an emergency closed-door meeting Friday but took no action.

While the United States, Britain, France and other council members raised the risks the tests posed, China said a U.S. and U.K. deal to provide Australia with nuclear-powered submarines poses a danger to the region, diplomats said, speaking on condition of anonymity because the talks were private.

France later circulated a proposed statement that the diplomats said expresses concern over the missile launches and calls on North Korea to fully implement U.N. Security Council resolutions that ban its ballistic missile firings. But Russia and China didn’t consider a council statement timely, the diplomats said, so its approval remains uncertain.

Earlier this week, in his government’s latest mixed signal, North Korea leader Kim Jong Un expressed his willingness to restore the communication hotlines with South Korea in the coming days, but he also shrugged off U.S. offers for dialogue as a “cunning” concealment of its hostility against North Korea. He also insisted that South Korea abandon its “double-dealing attitude” if it wants to see an improvement in Korean relations. His comments largely echoed demands from his powerful sister Kim Yo Jong, who has taken the lead in the North’s ongoing pressure campaign.

South Korea has said it would prepare for the restoration of the cross-border phone and fax lines, which have been largely dormant for more than a year. But as of Friday afternoon, North Korea remained unresponsive to South Korea’s attempt to exchange messages through the channels, according to Seoul’s Unification Ministry, which handles relations with the North.

During an Armed Forces Day ceremony on Friday, South Korean President Moon Jae-in vowed to repel any attempt to threaten his people’s lives and strive to achieve lasting peace. He didn’t mention North Korea’s recent tests in a possible effort to keep alive the possibility of talks between the Koreas.

White House press secretary Jen Psaki said Friday that U.S. officials were still assessing the most recent missile launch. She said Biden administration officials have made efforts to reach out to North Korea to spur talks but have not received a response.

U.S. Secretary of State Antony Blinken told reporters Thursday that Washington “certainly supports” inter-Korean dialogue in principle. But he said the U.S. was concerned about North Korea’s recent launches, which he noted were in violation of U.N. Security Council resolutions and created “greater prospects for instability and insecurity.”

Among the weapons North Korea tested in September were a hypersonic missile, a newly developed cruise missile and a ballistic missile launched from a train. South Korea’s military assessed the hypersonic missile to be at an early stage of development, but experts say the other weapons displayed North Korea’s ability to attack targets in South Korea and Japan, key U.S. allies that host American troops. Earlier this week, the U.S. Indo-Pacific Command said its commitment to the defense of South Korea and Japan “remains ironclad.”

North Korea has not tested a long-range missile capable of reaching the U.S. mainland for about four years — what experts see as an indication it is carefully calibrating its provocations to keep alive its chances for diplomacy.

This article corrects that it is a U.S. and U.K. deal to provide nuclear-powered submarines to Australia, not U.S. and U.N.

Associated Press writers Edith M. Lederer at the United Nations and Matthew Lee in Washington contributed to this report.