Indigenous leader to France’s Macron: Save the Amazon

Indigenous leader to France’s Macron: Save the Amazon 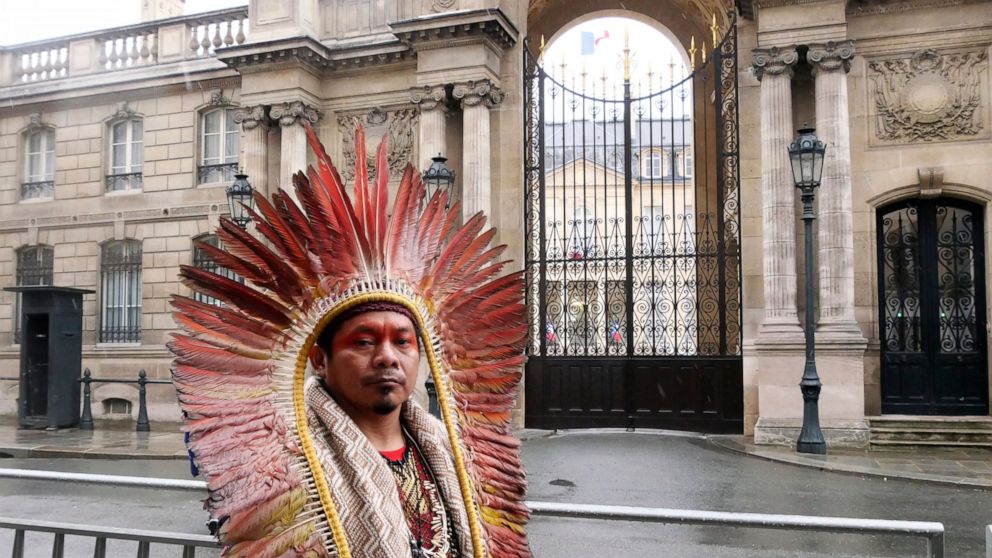 Catching illegal loggers deep in the Amazon with ‘Guardians of the Amazon’: Part 1

The indigenous people of the Brazilian Guajajara tribe are taking it upon themselves, risking life and limb, to track and apprehend illegal loggers in their ancestral land.The Associated Press

PARIS — Decrying the “predation” of his homeland, a Brazilian Indigenous leader is appealing to France’s president to use his global sway to fight the deforestation of the Amazon.

Ninawa, a leader of the Huni Kui people who uses just one name, delivered a letter on Saturday to the office of French President Emmanuel Macron. He urged the French leader to lean on the whole 27-nation European Union to limit trade linked to deforestation. His appeal also called for pressure on Brazilian President Jair Bolsonaro to halt logging, farming and development projects that are destroying the Amazon rainforest.

In the letter, seen by The Associated Press, Ninawa says: “The current (Brazilian) administration is working to authorize or amnesty the extraction and export of timber, as forest fires devastate flora and fauna, to create fields for monocultures of soybeans and for raising cattle.

“This same administration works to legalize and institutionalize the invasion of the territories of the original peoples, considered as an obstacle to agribusiness and to what is wrongly called ‘development,’” it says.

Ninawa left his letter with a police officer at the presidential Elysee Palace in Paris and got a receipt in return. There was no immediate word from Macron’s office on whether the letter would be given to the French president himself.

Speaking to the AP, Ninawa said Indigenous people are “every single day putting our lives at risk so that we can defend nature for all humankind. So it is important that each country, each citizen from each country, do their share and also become guardians of Mother Nature.”

Bolsonaro has recently tried to improve his environmental credibility, but for most of his presidency has encouraged development within the Amazon region He has dismissed global complaints about its destruction as a plot to hold back the nation’s agribusiness. His administration also has weakened environmental authorities and backed legislative measures to loosen land protections, emboldening land grabbers.

Ninawa wants European decision-makers to stop facilitating the trade of products directly linked to deforestation, such as soybeans, meat and wood. He’s in France to attend a peace conference in Normandy, on the invitation from the environmental group Planete Amazone.

Saying Indigenous leaders have been killed for resisting loggers, he noted how Macron drew worldwide attention to forest fires in the Amazon in 2019, by tweeting that “our house is burning” and calling out Bolsonaro’s policies. He also noted that France takes over the rotating EU presidency starting Jan. 1.

He lamented that the global U.N. COP26 climate talks in Glasgow, which start Oct. 31, “are not solving the problem of our planet. COP has turned into a big fair for multinational business, with governments trading our biodiversity.”

“Today we must choose between a few decimal points of France’s and Europe’s GDP, and our own lives,” he wrote.

Bolsonaro has been trying to demonstrate to U.S. President Joe Biden’s administration that he is serious about addressing climate change and curbing illegal deforestation. He’s toned down his rhetoric celebrating Amazon development and demeaning Indigenous populations.

There have been preliminary encouraging signs: the number of deforestation alerts declined year-on-year for two months straight, and the number of forest fires in the first nine months of 2021 has fallen from last year.

But Indigenous leaders and other critics question Bolsonaro’s sincerity and say it’s too early to say that recent data represents a trend.

Follow all AP stories on climate change at https://apnews.com/hub/climate-change.